There is a common misconception that data-driven decision making and the use of complex algorithms are a relatively recent phenomenon in the public sector. In fact, making use of (relatively) large data sets and complex algorithms has been fairly common in government for at least the past few decades.

As we begin constructing ethical frameworks for how data and algorithms are used, it is important that we understand how governments have traditionally employed these tools. By doing so, we can more fully understand the challenges governments face when using larger data sets and more sophisticated algorithms and design ethical and governance frameworks accordingly.

END_OF_DOCUMENT_TOKEN_TO_BE_REPLACED

In late 2014, I had a chance to present on the main stage at the annual Code for America Summit in San Francisco. To the surprise of very few people, I was there to talk about cities and data.

Earlier that year, I had finished up my term as the first Chief Data Officer for the City of Philadelphia, one of the largest cities in the country. But my focus that day was not on big cities like Philadelphia—but rather on smaller cities that had not yet started down the road of leveraging data to spur innovation and inform better policy decisions.

END_OF_DOCUMENT_TOKEN_TO_BE_REPLACED

I’ve had the opportunity recently to talk to people in several different city governments that are facing a common challenge — how to liberate operational data from a legacy system.

This is a challenge that lots of city governments face, and it strikes me that there are some common lessons that can be derived from cities that have gone down this road already for those that are still trying to figure out the right approach.

The following suggestions are crafted from my own experience as a municipal government official charged with making data more widely available, and those of people in similar positions that I’ve had a chance to speak with.

END_OF_DOCUMENT_TOKEN_TO_BE_REPLACED

Late last year, I wrote a book devoted to civic hacking based on my experience working in state and local government, and inside civic tech communities. 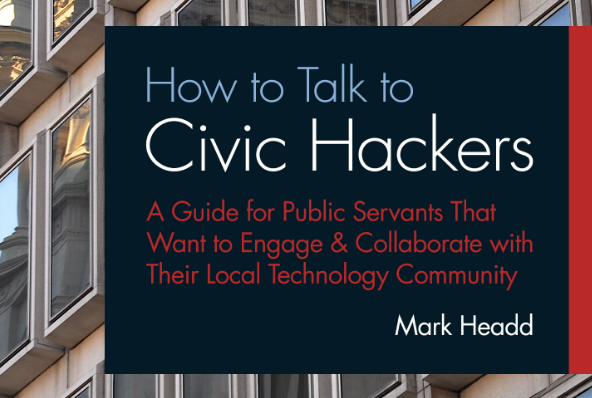 It’s a book meant for public servants and people working inside government who want to connect with innovators and technologists outside of the bureaucracy. The premise is simple – governments need to find more effective ways of collaborating with members of their local civic tech communities:

Governments must develop strategies for engagement that can help direct the efforts of outside technology experts to issues or challenges that will have the broadest impact and the largest potential payoff. They will need to learn how to rally people with special talents to a particular cause or challenge, and then to turn those outside efforts into tangible outcomes for government agencies. They must learn to view the technology community as a potential talent pool from which they can draw a new generation of public servants who possess unique expertise in digital service creation.

It’s open source and available on Github. If you have a suggestion for how I can make it better, send a pull request or open a new issue.

I hope you enjoy it.

We live in a time when people outside of government have better tools to build things with and extract insights from government data than governments themselves.

These tools are more plentiful, more powerful, more flexible, and less expensive than pretty much everything government employees currently have at their disposal. Governments may have exiting relationships with huge tech companies like Microsoft, IBM, Esri and others that have an array of different data tools — it doesn’t really matter.

In the race for better data tools, the general public isn‘t just beating out the public sector, its already won the race and is taking a Jenner-esque victory lap.

This isn’t a new trend.

END_OF_DOCUMENT_TOKEN_TO_BE_REPLACED

The title of “Chief Data Officer” – once an uncommon one in state and municipal governments – is becoming less uncommon. And that’s a very good thing for public sector innovation.

As recently as a few years ago, Chief Data Officers were found almost exclusively in big city governments like Chicago, New York and Philadelphia. Municipal governments provide services that touch citizens’ lives in more intimate ways than states or the federal government, and big cities have a critical mass of data that is attractive to the growing community of users with powerful tools for mapping and analyzing data. So it’s no surprise that cities have led the way in creating new, data-focused positions like CDOs, and in releasing open data to the public.

But increasingly, state governments and small to midsized cities are appointing Chief Data Officers, and creating new positions that focus almost exclusively on data. For example, earlier this year the City of Syracuse (a city of approximately 145,000 in Central New York) appointed it’s very first Chief Data Officer. It’s worth noting that this is not a stand alone position as in some other cities. The CDO position in Syracuse was deliberately made part of the city’s internal innovation team (which is funded through the Bloomberg Philanthropies iTeam program) and plays an integral part in the city’s efforts to use data internally to provide services more efficiently.

END_OF_DOCUMENT_TOKEN_TO_BE_REPLACED

The term “civic tech” gets used a lot, and it often means different things to different people. To me, this has always meant that the work being done in this area is dynamic, growing, and evolving rapidly – all good things that suggest the impact of civic technology will ultimately be broad and durable. I’ve never been prone to excessive handwringing.

END_OF_DOCUMENT_TOKEN_TO_BE_REPLACED

There’s an interesting piece on open data APIs on GovTech that echos a lot of the things I’ve thought and said about government APIs over the past few years. It’s worth a read.

APIs are an increasingly important way that governments make their open data available to outside users. Typically, when we talk about open data APIs (and I am as guilty of this as anyone) its almost always with a focus on either the technical underpinnings and data on one side, or the benefits that citizens will ultimately reap from the data being made available on the other.

There are far too seldom discussions of what lies in the middle of these two ends and how this critical piece ultimately helps make government open data APIs better and citizens better off.

END_OF_DOCUMENT_TOKEN_TO_BE_REPLACED

The most important thing about civic technology has nothing to do with technology at all.

The term “civic technology” gets used a lot, and it may mean different things to different people. I think this highlights the fact that the work being done in this area is dynamic, growing, and evolving rapidly — all good things that suggest the impact of civic technology will be broad and durable.

For me, the term civic technology is inextricably related to the world of civic hacking. I began my career in government in what I would describe as the “old fashioned way”: graduate school to study public administration followed by work on political campaigns. Having now worked for three different state and local governments in both the legislative and executive branches, I consider civic hacking and civic technology to be the future of how governments will deliver services.

END_OF_DOCUMENT_TOKEN_TO_BE_REPLACED

Getting a speeding ticket in the State of New York can be a traumatic – and expensive – experience.

Drivers convicted of speeding often face penalties and fines, and repeated or excessive offenses can result in the loss of a license. But in some places in New York State, drivers issued a speeding ticket may see a very different outcome than one would typically expect: a smaller fine, the avoidance of long-term penalties, and – oddly enough – additional money in local government coffers.

Last year, I wrote a post detailing some data science techniques that used a data set from the State of New York on traffic violations. This is an incredibly rich data set and it’s awesome that the state makes this available as open data. However, the issuance of traffic tickets only tells part of a larger story – since the release of this initial data set, the state has now released data on traffic ticket convictions. Comparing both of these data sets allows us to see the full picture of what happens when a traffic ticket is issued in the State of New York, from issuance all the way through to adjudication.

An examination of these data sets show that – in certain areas of the state – tickets issued for speeding are much more likely to be negotiated down to a lessor offense that allows drivers to avoid a penalty from the Department of Motor Vehicles (DMV), and actually provides a backdoor benefit for local governments.