The civic technology community has a love-hate relationship with transit apps.

We love to, and often do, use the example of open transit data and the cottage industry of civic app development it has helped spawn as justification for governments releasing open data. Some of the earliest, most enduring and most successful civic applications have been built on transit data and there literally hundreds of different apps available.

The General Transit Feed Specification (GTFS), which has helped to encourage the release of transit data from dozens and dozens of transportation authorities across the country, is used as the model for the development of other open data standards. I once described work being done to develop a data standard for locations dispensing vaccinations as “GTFS for flu shots.” 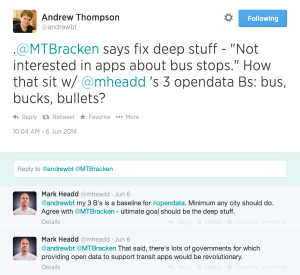 But some in the civic technology community chafe at the overuse of transit apps as the example cited for the release of open data and engagement with outside civic hackers. Surely there are other examples we can point to that get at deeper, more fundamental problems with civic engagement and the operation of government. Is the best articulation of the benefits of open data and civic hacking a simple bus stop application?

Last week at Transparency Camp in DC, during a session I ran on open data, I was asked what data governments should focus on releasing as open data. I stated my belief that – at a minimum – governments should concentrate on The 3 B’s: Buses (transit data), Bullets (crime data) and Bucks (budget & expenditure data).

To be clear – transit data and the apps it helps generate are critical to the open data and civic technology movements. I think it is vital to exploring the role that transit apps have played in the development of the civic technology ecosystem and their impact on open data.

Transit data supports more than just “next bus” apps. In fact, characterizing all transit apps this way does a disservice to the talented and creative people working to build things with transit data. Transit data supports a wide range of different visualizations that can tell an intimate, granular story about how a transit system works and how it’s operation impacts a city.

One inspiring example of this kind of app was developed recently by Mike Barry and Brian Card, and looked at the operation of MBTA in Boston. Their motive was simple:

We attempt to present this information to help people in Boston better understand the trains, how people use the trains, and how the people and trains interact with each other.

We’re able to tell nuanced stories about transit systems because the quality of data being released continues to expand and improve in quality. This happens because developers building apps in cities across the country have provided feedback to transit officials on what they want to see and the quality of what is provided.

Developers building the powerful visualizations we see today are standing on the shoulders of the people that built the “next bus” apps a few years ago. Without these humble apps, we don’t get to tell these powerful stories today.

Transit apps are about more than just getting to the train on time.

Support for transit system operations can run into the billions of dollars and affect the lives of millions of people in an urban area. With this much investment, it’s important that transit riders and taxpayers are able to hold officials accountable for the efficient operation of transit systems. To help us do this, we now have a new generation of transit apps that can examine things like the scheduled arrival and departure times of trains with their actual arrival and departure time.

Not only does this give citizens transparency into how well their transit system is being run, it offers a pathway for engagement – by knowing which routes are not performing close to scheduled times, transit riders and others can offer suggestions for changes and improvements.

A gateway to more open data

One of the most important things that transit apps can do is provide a pathway for more open data.

In Philadelphia, the city’s formal open data policy and the creation of an open data portal all followed after the efforts of a small group of developers working to obtain transit schedule data from the Southeastern Pennsylvania Transportation Authority (SEPTA). This group eventually built the region’s first transit app.

This small group pushed SEPTA to make their data open, and the Authority eventually embraced open data. This, in turn, raised the profile of open data with other city leaders and directly contributed to the adoption of an open data policy by the City of Philadelphia several years later. Without this simple transit app and the push for more open transit data, I don’t think this would have happened. Certainly not as soon as it did.

And it isn’t just big cities like Philadelphia. In Syracuse, NY – a small city with no tradition of civic hacking and no formal open data program – a group at a local hackathon decided that they wanted to build a platform for government open data.

The first data source they selected to focus on? Transit data. The first app they built? A transit app.

In the next year or so, as the open data movement in Syracuse picks up steam, people will be able to look back at this development as the catalyst for it all. Transit apps and transit data are a gateway to adoption of a more comprehensive open data policy by governments.

In many ways, those of us working in the civic technology and open data fields are standing on the shoulders of the people who built all those “next bus” apps a few years back. Their efforts, and the value of transit apps, deserve our recognition.