Open Government and the Bully Pulpit

Last week in Honolulu, the Mayor got on a bus.

And while this may seem like a small thing, it’s just the latest example of how mayors and municipal leaders are using the weight of their offices to advance the agenda of open government. 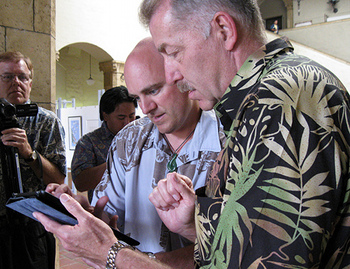 Mayors are not often known for their prowess at writing code. But that didn’t stop Mayor Peter Carlisle of Honolulu – a 2012 Code for America partner city – from joining coders, designers, social media enthusiasts and other self professed “geeks” last week to discuss open transit data and civic applications at an event dubbed “Geeks on DaBus.”

Nor did it stop Philadelphia Mayor Michael Nutter from stopping by a Code for America hackathon in his city several weeks ago to offer encouragement and thanks to members of the CfA Brigade.

Mayors and other municipal leaders can send a powerful message with their actions – a message that can resonate with government employees and citizens about the strategic importance of open government. Almost nothing sends this message as clearly as how local leaders communicate their priorities.

Where are the leading cities in civic innovation putting their priorities?

The City of Chicago has appointed a Chief Data Officer. The City of Boston has created an Office of New Urban Mechanics. The cities of Philadelphia and San Francisco have appointed Chief Innovation Officers.

These are just a few of the examples of how mayors and local government leaders are using the visibility and power of their offices to set the agenda for open government.

The message all of these leaders are sending is clear – open government, civic coding and citizen engagement are critical elements of successful governance in 2012 and beyond.